This Month's Wednesday Words (sorry, one day late!) comes from an experienced Day Camp Coordinator, Nancy Craig of St. Paul's Edmonton.
The local Church/Community Coordinator is a vital component of the Day Camp Ministry. He or she acts as a liaison between the Community and Crosstalk Ministries, recruits local helpers, is on hand before, during and after the Day Camp and does all sorts of behind the scenes work to make Day Camps an amazing week for everyone.
Nancy Craig is one of our favourite Coordinators who has been an invaluable link for much of the Ministry we have exercised in Alberta over the past number of years. so with no further ado I will let her tell her story.... 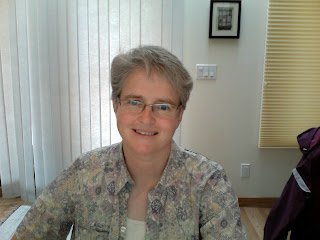 My name is Nancy Craig and I am a Crosstalk Day Camp coordinator – sounds a bit like an addictions anonymous meeting, doesn’t it? Well, it can be addictive… I have been parish coordinator at St. Paul’s in Edmonton for the last 7 summers.

I heard friends talk about Crosstalk Day Camps when I was a student in Montreal in the 1980’s; years later my two older children attended a modified Cross Talk Day Camp when we drove from Winnipeg to Montreal for Essentials ’94; and a couple of years after that, Jeannette Deyelle coordinated Crosstalk Day Camps at St. Aidan’s in Winnipeg, and my three older children attended, and I helped with Scramblers or as Camp medic.

Our next move brought us to Edmonton, and eventually we settled at St. Paul’s. My older 3 were teens by then, but I got involved in Children’s Ministry at the church because my youngest was about 9. Our church Children’s Ministry team was looking for some kind of VBS or day camp to offer for our own children and as a neighbourhood outreach, so I suggested Cross Talk. By chance (Ha! As God would have it, more like), Brett Cane happened to be passing through Edmonton on other business that May, and made time to meet with me and a couple of others, with a view to perhaps having a Day Camp in a year’s time. But again, as God would have it, there happened to be a slot open for a western team for week one of Day Camp that very year -suddenly I was parish coordinator and in full tilt getting ready!

I am very blessed indeed to be part of a church that has vision for children’s ministry, youth ministry, and neighbourhood outreach, so I was well supported in getting things ready in short order. Our youth pastor, Amy Croy, was instrumental in getting some youth enthused about being on the parish team (and I did conscript my own three teens, who were reasonably willing, I think, because of their own memories of the program as campers in Winnipeg).
The youth have been great, but all ages have provided support by billeting, being snack helpers, helping gather supplies, and praying for everything to do with the camp. It truly does become a whole parish event. I wouldn’t say that coordinating doesn’t have some demanding aspects, but I will say I have felt the full support of my church family, and of Valerie at mission control in Montreal! 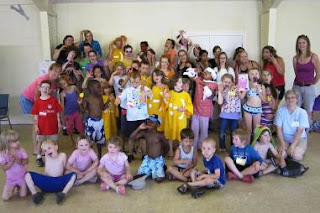 Our camps over the last seven years have ranged in size from about 20 to 50. In any given year, 25% to 50% of the campers are not from our church, which is wonderful. Some of these kids do make Jesus their special friend – and sometimes, despite follow up efforts, we never find out what happens after.

In my other life (or one of my other lives?), I work at an inner city medical clinic. A couple of years ago, I was explaining to a patient that I wouldn’t be in the next week because I was helping with a day camp at my church, and she told me her story. She grew up in another city. Her parents split when she was 12, and she started living on the streets when she was 14. She had quite the history: drugs, alcohol, prostitution, jail time, children apprehended. When she decided to clean up about 8 years ago, it was because she remembered attending a neighbourhood church day camp when she was under 12, and how that church had welcomed her, accepted her, and taught her about Jesus and his love for her. That was what she wanted to come back to, 30 years later, and she did. She even has her kids back now. It wasn’t a Cross Talk day camp, but something similar. Her story encouraged me more than I can say. You just never know where a day camp will lead!

Is Day Camp worth it? Indeed yes! Thanks be to God.

Posted by Crosstalk Ministries at 10:29