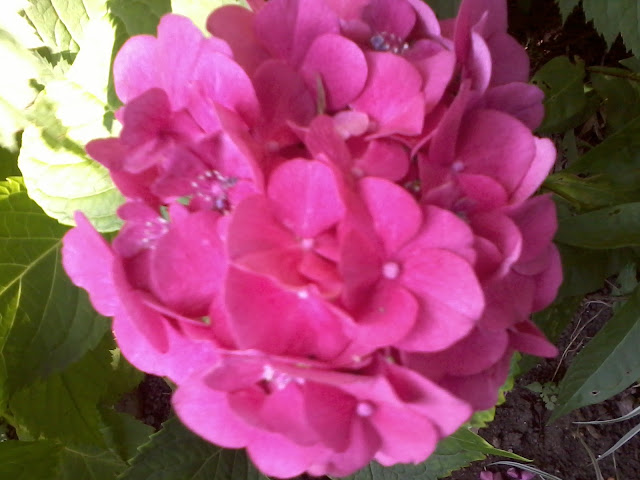 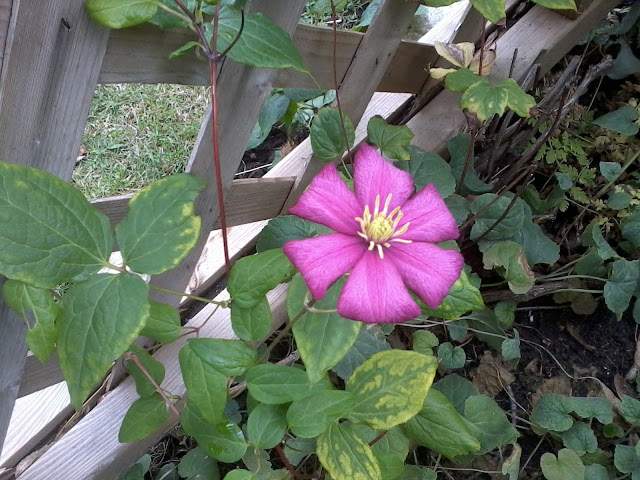 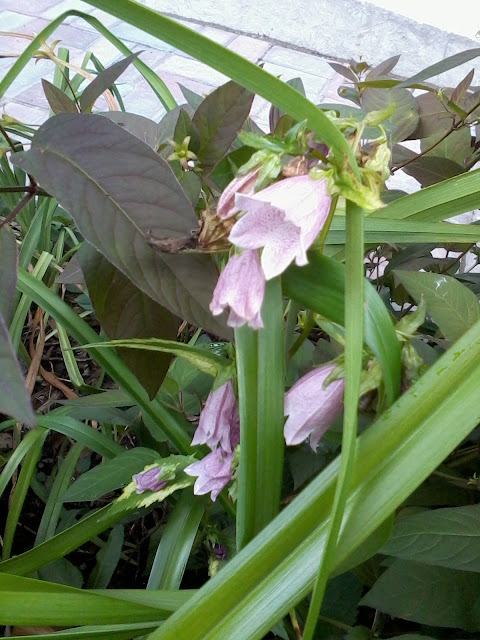 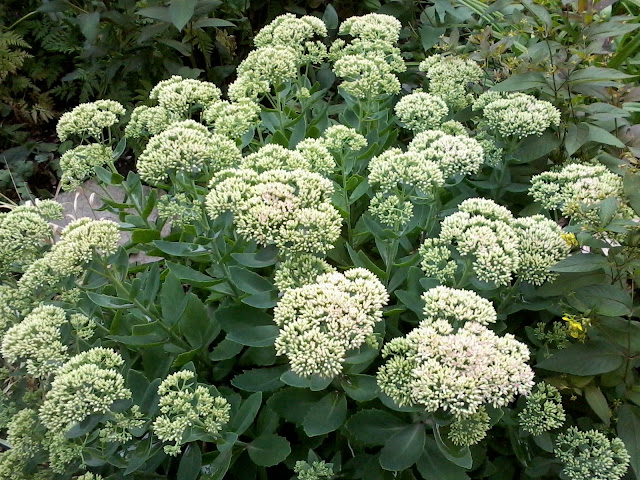 As mentioned when last writing, this week was Senior Youth Camp Week.


Last Saturday, after seeing the Staff off from Pre-Camp at Isaiah 40, and after doing a pile of laundry and packing away empty containers etc. I hunkered down to write the 15 Team Evaluations.


Most of Monday and Tuesday was spent pouring over the notes relative to this task then, with the evaluations and accompanying letters folded and sealed (with sealing wax!) into the envelopes, I was able to tackle the 10 prayer letters I had promised to write for Campers.


Yes, I did paint 10 bookmarks, write letters on the reverse side with a special Bible verse selected for each, cover them with clear adhesive plastic and add a loop of ribbon. Then I put those into envelopes as well! 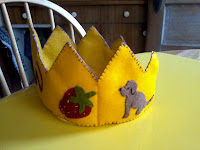 As of Wednesday I still had baking to do to take down in my “care package” for the Huyers and the big task of sewing and embroidering Wiliam’s Birthday Crown. 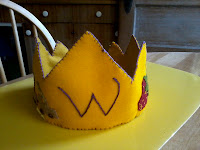 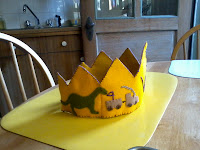 So, that afternoon I baked 2 flavours of Biscotti and also prepared a jar with a variety of Organic Teas for the care package. Time was running out to complete the Crown but by working quite late Wednesday evening, it was completed to my satisfaction (I sure hope William likes it!!)

Thursday, the plan was to leave the city at 10 am. After waiting to hear news of a possible ride down I had taken matters into my own hands on Monday and arranged to borrow Rod Stilwell's second car to make the trip. 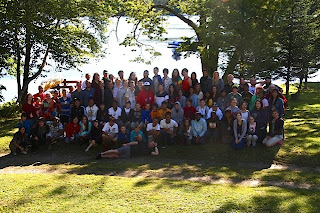 On Wednesday they called from Camp to see if I could arrange, before leaving, to pick up the 80 copies of the Camp group photo from our super copy centre man, Henry. I said this would not be a problem if they sent it in EARLY. Well, needless to say, there were several glitches involving un-openable files and in the end the photos were not ready for pick up until 1130 am.


At that hour I was waiting on the copy centre doorstep and then leapt into the car to begin the journey. There were still 2 hours before the start of my first workshop and how much traffic could there be at noon on a Thursday? Well unfortunately the answer to that question is… plenty!


By only slightly exceeding the speed limit and by eating what had been a tasteful picnic lunch, in the car I slid into Camp with about 5 minutes to spare before the start of my workshop. 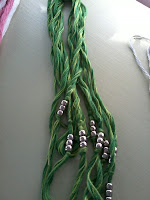 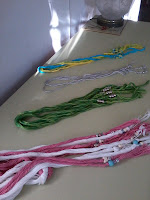 To add to the stress, the workshop coordinator had lost the carefully worded “blurb” I had written about Parandas and thus most of the 8 Campers who had signed up appeared to think we were going to be making braided friendship bracelets ( sigh) 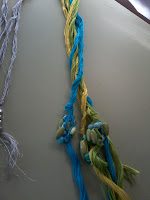 The venue was also down on the picnic tables by the lake, where a nice stiff breeze caused havoc with the embroidery threads necessary for making Parandas; thus most of my time was spent circling round and round the group helping untangle knotted threads. A very frustrating hour! At the end about half the group had made things vaguely reminiscent of my samples.


However there was no time to lament so I did my best to clear up and dashed to the Worship Hall to meet the group who had signed up to learn the Liturgical Dance for the Closing Worship Service.


Mercifully this group was keen and serious about the job at hand and, apart from a few technical problems (there was no CD player for the music so we made do with an iPhone hooked up to some speakers) the tutorial went well and after about an hour of hard work the group seemed confident enough to organize more practices for yesterday and for today, prior to the Service. I am VERY anxious to know how it went in the end.


Was it possible to relax after that? No! I then rushed over to the dining room deck where 11 of my Team Members (a combination of both counsellors and campers) were waiting to receive their Evaluation packages. We prayed together and had a little visit so I could hear about their various Camp experiences and then  the envelopes were distributed and one of the Team Leaders closed in Prayer.


It was now close to 5pm, my hoped for departure time, so I met briefly with Timothy and Victoria to give them a bunch of administrative items brought from the office, the care package, William’s stuffed Panda Bear (retrieved from the laundry at Isaiah 40!), his birthday gift and the photos.


Wil and I pulled out of the parking lot at 5:02pm.  Wil, I might add was pretty good all day (according to his standards!) He really is excellent in the car, mostly lying down on the backseat snoozing or munching on an ample supply of snack carrots, and at Camp he was tied on a long rope to various posts and enjoyed many many hugs and pats from Staff and Campers alike.


Paul, one of the big burly Staff members, also took him for a walk and was able to control Wil’s enthusiasm! It was extremely cute because as Wil and Paul disappeared quickly into the trees, little William turned anxiously to me and said “Auntie Valerie, someone is taking away the God-Puppy”. -I must explain that since I am Godmother to William and Alexander, by extension, their Dad, Timothy, always refers to Wil and Mandu as the “God-Puppy” and the “God-Kitty” respectively, but this was the first time I had heard William (at almost 4years) pick up on the expression!


Driving home I was confident I could make it back to NDG by 7pm to pick up my bi-weekly fruit box before the CO-OP closed at 7pm. Ha! Ha!


We clipped along nicely (apart from having to drive the whole way squinting into the setting sun) until I hit the South Shore suburbs of the city at which point all traffic ground to a complete halt.


While being quite fond of driving standard shift when actually moving forward I am not at all fond of doing so in a borrowed vehicle while inching forward in gridlock traffic at 6pm on a hot summer evening, with a large panting dog leaning over my shoulder! But that is what I did as the clock ticked towards 7pm.


We finally pulled into the driveway a 7:40pm, having long since abandoned the possibility of getting the fruit box, ending quite a marathon day.


Rather than cooking the stir-fry, previously planned I ended up eating fruit and cheese at around 8:30pm, after cleaning up all the paraphernalia, feeding the dog, and making a suitable fuss of the lonely, and huffy cat. 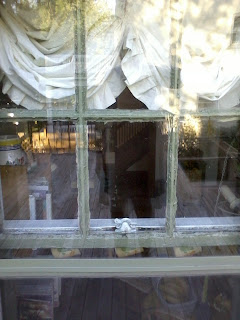 Has there been time for much else around here this week? well not really. The two deck-side windows did get painted, and yesterday Ed put in a short appearance to begin adding the siding along the deck walkway.

Last evening my friends Ian and Barb came over for dinner. This is sort of an annual tradition during Camp Week as their younger daughter always attends Camp and their son Josiah (one of the Day Camp Team Leaders and a pillar of our Day Camp Committee) was on Staff at Camp.


I planned an Italian meal, first checking with Barb to see if she and Ian liked Mussels. Mussels are one of those dishes which people seem to either love or loathe so I did want to make sure first! Barb explained that Ian loved them and that she had only tried them once but was game to try again! I assured her there would be other food on the table, which she could fill up on if she ended up disliking them. But all went well! 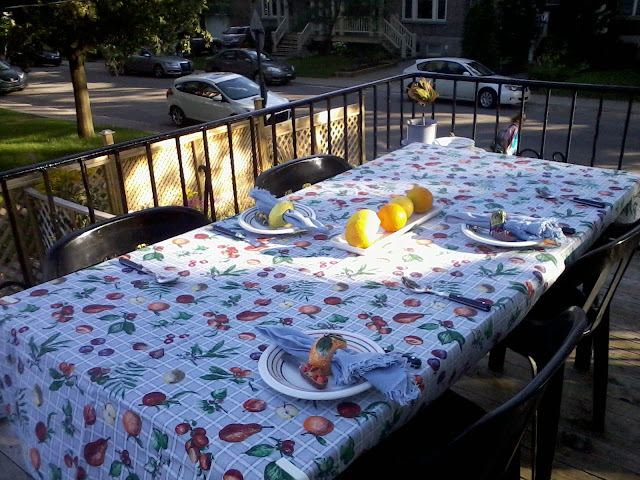 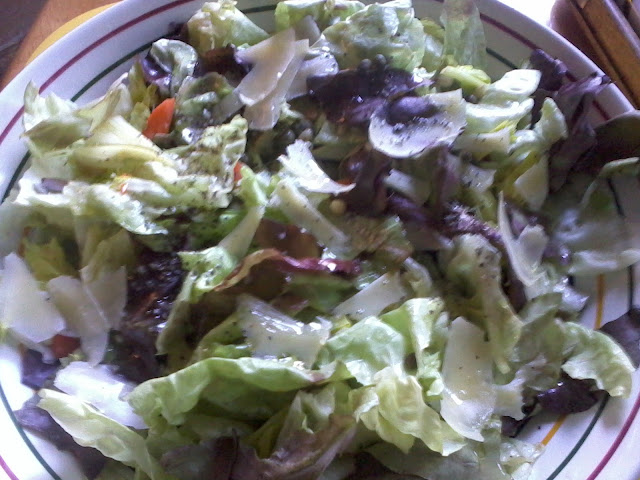 We started with a mixed salad, which included various veggies with pine nuts, capers and shaved Parmesan in an oil and lemon dressing. I had baked a ciabatta loaf too. Then we had big bowls of Italian-Style Steamed Mussels. Lastly, for dessert, I had made a fresh strawberry and pistachio Semifreddo. You can find that recipe here.. 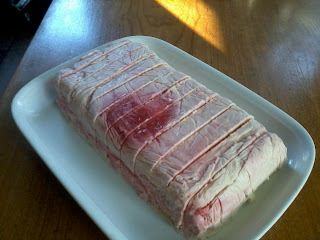 We were a little late starting as Ian had been on his own marathon excursion to procure a rented vehicle which was to be used today to go down to Camp to bring home 4 Campers and then tomorrow to help move their elder daughter into an apartment. But it was a lovely Summer evening and we lingered in the dark on the deck, until bugs starting biting us and the Hendersons headed home, as they  needed to make an early start for Camp today.

While mowing the lawns this morning I was singing the Liturgical Dance song to myself and wondering if the Dance was being offered at that same moment since the Service was to take place at 10am.


Everyone should have left the site by now. Of course there has already been a call from a Camper who left something behind there! I gave him a Staff member’s cell number to try in case someone was still there!


So with little excuse left, I need to turn my attention to the Church Feedback Forms and begin preparing Application Forms and a 2014 Program Flyer as all of those materials need to be ready to send out over the next couple of weeks.


I just hate to admit that Summer is almost over.


In one more week the house will be turned upside-down to change to the Harvest Thanksgiving Decorations. Still no Boarder on the horizon. Earlier in the week I was most excited by the prospect of a student from Sweden (I LOVE Swedish art and design) but, sadly for me she found an apartment with some other girls.


Of course I am worried. I know that I just cannot keep this house without the extra income, which comes from taking Boarders.  As I have continued to pray about all this I have clearly heard the Lord telling me to TRUST. And there is no option but to do that. I have advertised and passed the word around and have followed up on several possibilities but still no one has materialized. As always I am caught in a struggle because I would really love to be able to live alone. It is hardly as if I was always alone anyway as there is a constant stream of Crosstalk people in and out of the house all of whom are very dear to me. But the luxury of living alone is financially unrealistic and I am also tormented by the feeling that to live alone is selfish as a Christian and no matter how difficult it might be to live with strangers somehow I should be doing that, and should be always working to build “family”,to serve as God’s steward in this place, and not to “keep” it for myself. These are the reflections I need to work through.


And what recipe should I offer today?


I thought I would share Italian–Style Steamed Mussels, because EVERYBODY should try Mussels at least once. They are harvested in Canada, are one of the most reasonably priced seafoods, they are nutritious, and they taste good!


In a stovetop casserole, heat the olive oil and garlic over medium heat for approx. 5minutes, until fragrant.


Add the tomatoes and simmer gently for 10minutes until the sauce has thickened.


In another deep skillet place the mussels and water over medium het and steam for approx. 10 minutes or until all the mussesl have o-ened. Discard any unopened mussels.


Carefully ladle the mussels, with there liquor, into the tomato sauce and toss thoroughly.


Transfer to a serving dish, sprinkle with cilantro and several grindings of fresh pepper. Serve immediately, with crusty bread.

Posted by Crosstalk Ministries at 20:20