Welcome to Wednesday Words, later than usual, but there seems to be a trend here! This month we welcome the Rev. Nick Brotherwood. I met Nick (and his whole family) when they were first in Canada to be part of the Travelling Teams, and we are still friends (whew!) I'm sure you will enjoy his story:-

Many, many years ago, in a galaxy far, far away, a much younger me, was quietly minding my business at Oak Hill College in North London, England, when two enthusiastic Canadians (Brett Cane and Paul Scudamore) trapped a bunch of us students in a classroom and inflicted the Crosstalk Day Camps Travelling Teams slide show on us. Being a sucker for this sort of thing, I returned home later that day and told Sue what I had seen and heard. This led to us taking off for Montreal several months later with our then three kids all under five for twelve weeks in the previously unexplored (by us) country of Canada. Five day camps, (T.M.R., Chambly, Grenville, Ottawa & Lachute) and several childhood diseases later, we returned to England having had a fantastic time but thinking that our future lay in England. God, it seemed, had other ideas. Five years later, having been ordained and set to work in Nottingham, a series of unlikely, but presumably God-orchestrated, events led us to emigrate to Canada and eventually make our home in Quebec.


Our three children, who made that first visit to Canada, continued the Crosstalk connection as parish helpers, and some as travelling team members, team leaders and even team trainers. Of the two children who had the longest exposure to Crosstalk, one is a social worker in a Children’s Hospital and the other an elementary school teacher. Do you think their experience with Crosstalk had any effect on their lives’ directions?


My experience has led me to the view that the range of resources Crosstalk Ministries offer, (Day Camps, Junior Camp, Senior Camp, Crossroads, Focus and others) are part of a really excellent Christian leadership development and disciple-making approach, that has positively impacted two generations of our family, and will also hopefully impact a third. 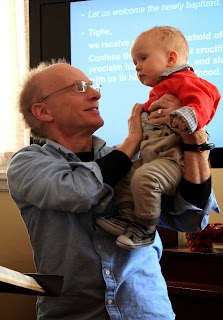 Posted by Crosstalk Ministries at 18:21