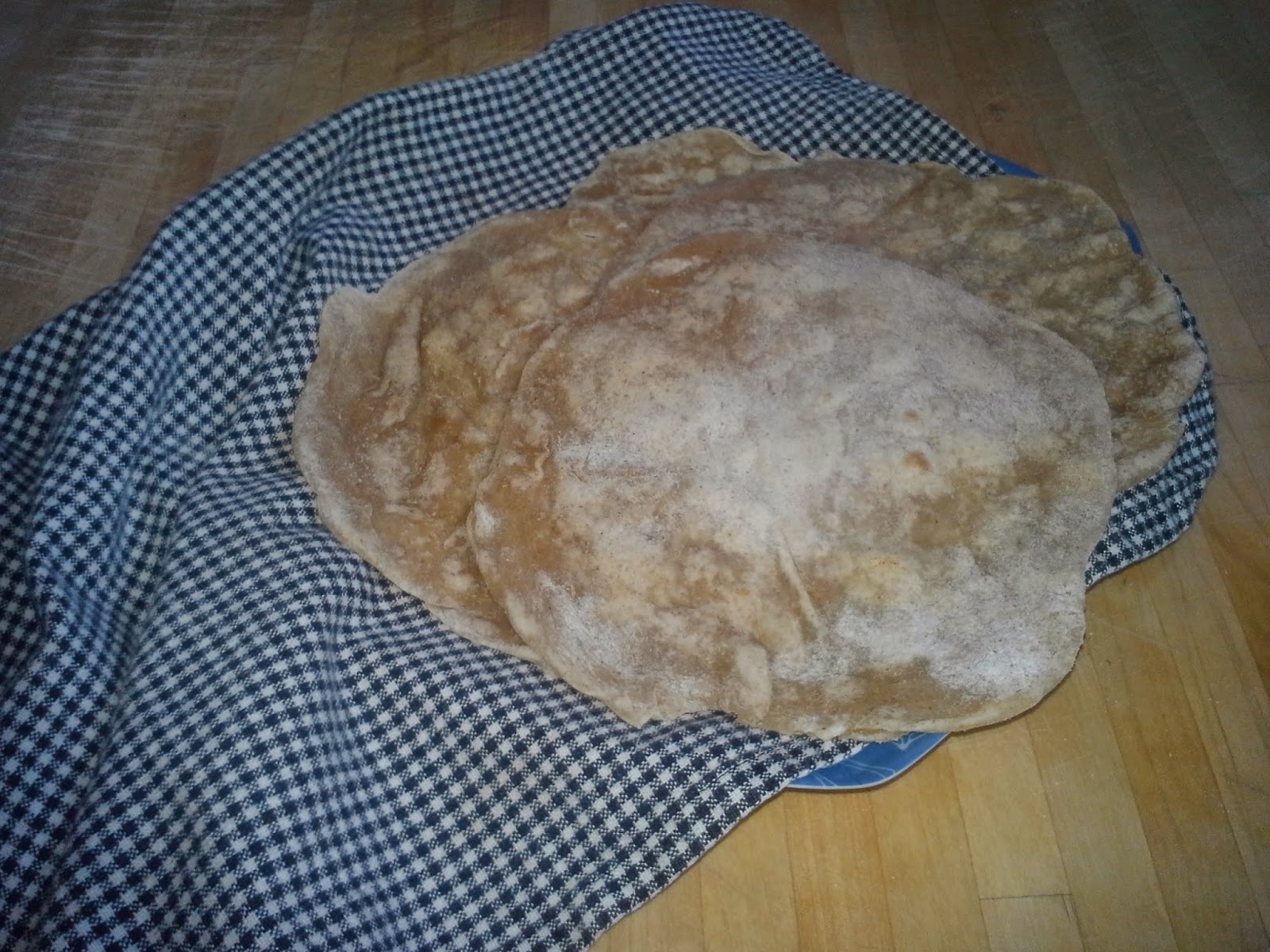 Another wet Sunday morning! Regretfully, I bussed to church with a backpack containing a frying pan! Why a frying pan? Well it seemed quit logical to me, because the crux of today’s Gospel reading (Luke 24:19-31),”The Road to Emmaus” is that the disciples recognized Jesus “in the breaking of the bread”; so today we made flour tortillas. As a matter of fact, while conducting a fruitless search through the St. Stephen’s House kitchen drawers, I realized I should have also toted a rolling pin! Mercifully a sturdy straight-sided glass (or vase?) was found and, after washing it out, it served as a reasonable rolling pin.
We began upstairs, re-telling the story with our big feltboard and then tiptoed down to the kitchen. Those on lunch duty were very nice about my having co-opted the butcher-block table so we set to work rolling and shaping. My helper, Mike, did an excellent job manning the frying pan and the 4 children enjoyed the activity (and tasting the results!) as we reviewed the story in greater depth.
After we had cleaned up, and had a time of prayer, we wrapped and froze the bulk of the batch, my intention being to ask Pastor Nick if the children’s “bread” can be used at our next Eucharist. It would be really special if they could present the elements, but we do not have a Worship Space conducive to any sort of “Procession”, hmm? Maybe something can still be worked out.
And so a long wet walk home. Reflecting on our time together, I hoped that they would remember the part about recognizing Jesus in the breaking of the bread. As adults, how often do we accept the proffered bread and chalice, just going through the motions and without the gut-wrenching astonishment of those first disciples who, in that moment, as Christ disappeared from their eyes they, still holding the fragments of the loaf in their hands, finally “understood.” 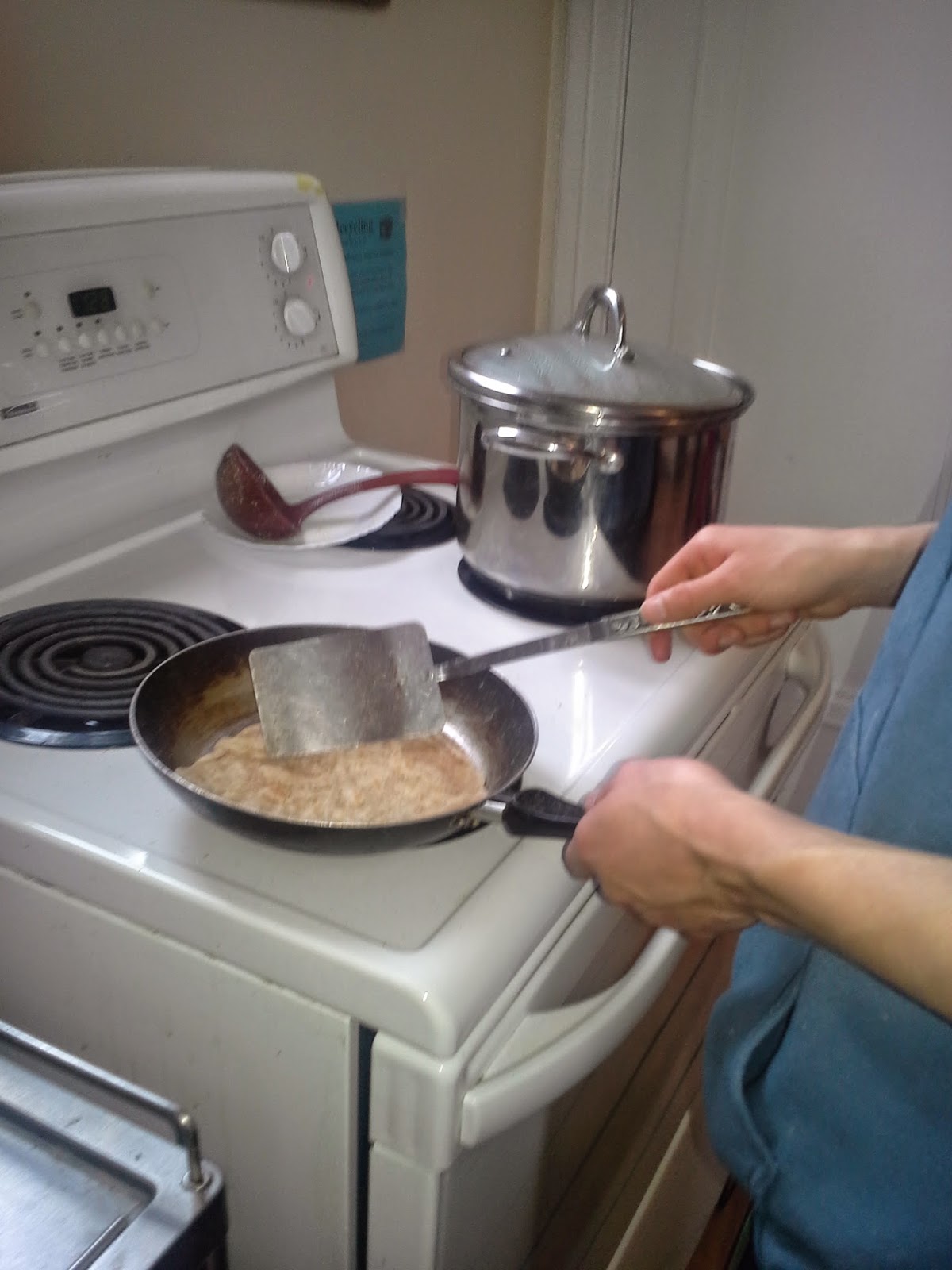 One of the Mums asked for the Tortilla Recipe. Having tried several in the past this one is totally the best! A batch of hot Tortillas can be produced in 45mins.,ready to serve for dinner beside a bowl of chilli, or turned into some great wraps.
1 cup unbleached flour
1 cup wholewheat flour
4 Tbsps. butter or margarine ( I use Earth Balance)
2/3 cup warm water in which 1tsp. sea salt has been dissolved.

Stir together the two flours in a medium mixing bowl. Cut in the margarine with a fork. Add the water and continue mixing until a soft dough forms. Turn out onto a floured surface and divide into eight smooth balls. Cover with a tea towel and allow to rest for 20mins.
Heat a large frying pan (cast iron is best) over medium heat. Roll out the first ball on a floured surface until approx. 8-9inches in diameter.Place in frying pan and cook for 1-2 minutes per side, until lightly flecked with brown. Continue rolling and cooking, wrapping cooked tortillas in a clean tea towel. Serve immediately, or leave to cool (still in the tea towel as this will keep them soft and flexible ). When cool, wrap tightly in plastic and freeze until needed. Makes 8 large tortillas. Easily doubled.


Posted by Crosstalk Ministries at 16:59