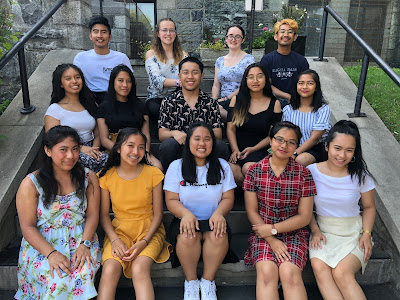 Travelling Team Members spend 4 of their 6 weeks on a Team of 2 to 4 people, visiting various churches and communities across Canada, leading Day Camps for children between the ages of 4 and 12. In each location the Team works with the Clergy, Coordinator and Local Team to run the Day Camp. The Travelling Team acts as leaders for both the children and the Local Community.

Prior to these 4 weeks, 2 weeks are spent in Training. The first of the Training weeks is done in a Day Camp setting, in large teams of 6-8, under the leadership of a Training Team Leader. The second week of Training is in a Retreat setting, where every aspect of the Program and other, more general childcare topics, are thoroughly discussed. The six weeks of Day Camps fly by, filled with fun, travel, fellowship and best of all a sense of having accomplished amazing things for God!

Anyone who is 16 years or older can apply to be become a member of the Travelling Teams.

Training Day Camps
The first week of Training occurs in 3 locations, with "double-sized" Teams. The Training Week Team Leader is an experienced Team Leader who knows the Program very well. The churches/communities are experienced with many local helpers who have participated in the Day Camp program. All Travelling Team Members are given a manual and a planner to read and help them prepare for each day's songs, devotions, activities and games.

In many ways this first week is a sort of trial by fire. Travelling Team members are thrown in at the deep end. Some have participated in Day Camps before as campers, but many, especially those from abroad, haven't even seen the program until they get there. Immediately they are expected to jump in and learn it. The Training Team Leader and others provide ample support to make it through this week. People volunteer for bits as things go along, with the encouragement of the Team Leader to ensure that everybody gets to participate in every part of the program.

The Training Retreat
Having experienced Day Camps in the first week, the second week is spent  living in a “Retreat” context as Team Members draw away from the world and focus on every aspect of the program as well as such topics as Team Dynamics, interpersonal skills and Team building. 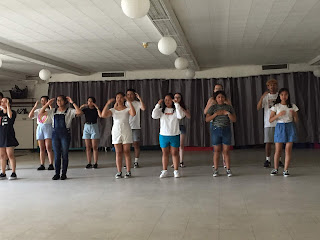 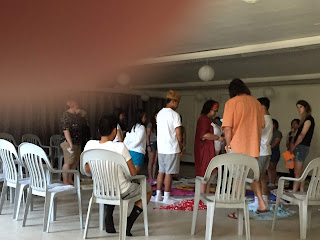 Everyone is divided up into the actual Teams they will be part of over the coming 5 weeks and eachTeam is billeted for the week in a separate home. The Retreat Week Billets are families and individuals with a background in Day Camps and a heart for helping in the formation of the Teams.
Each day of the Retreat Week everyone gathers at 9am in a rented Church Hall for workshop time.

The workshops are led by a variety of volunteers who have skills in each aspect of the program. We try to make workshops as interactive and participatory as possible with lots of hands on training. 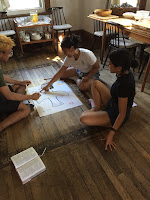 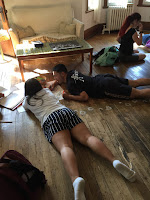 After sharing bag lunches brought from their billets homes workshops continue until mid-afternoon at which time everyone walks over to the CTM Office (also home of the Day Camp Director) where they take part in small group devotions using materials from Taizé France. 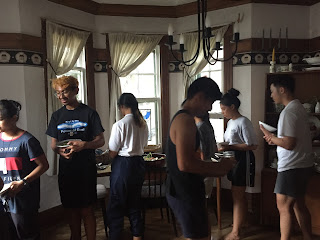 We then gather for supper together followed by Evening Worship. This time includes an interactive talk by a visiting speaker, lots of Taizé music and time for prayer and sharing. 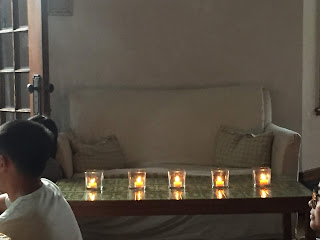 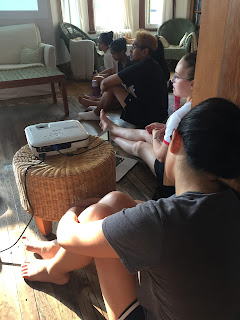 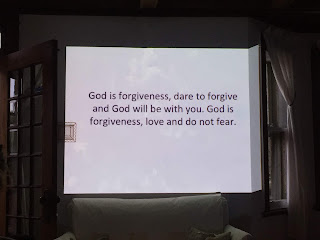 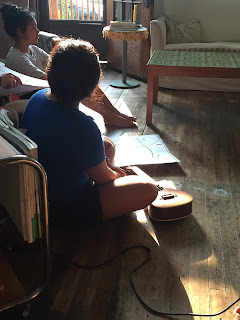 Teams leave the office at 830 pm and head back to their billets’ homes where they have time to unwind and enjoy fellowship with each other and their hosts.
On Thursday evening of the Retreat Week we hold a special Commissioning Gathering at which each Team Member is commissioned for their summer of ministry. Friends and families join us for this special occasion.
Friday is  “Something Special” day for the Teams as they spend their final day together relaxing and doing group activities. Some Teams leave for their first destination on Friday and the others leave early on Saturday.

"First of all I am very thankful for the whole experience itself because it was very educational and very helpful. I've learned a lot from the previous Team Leaders who were present, who shared their wonderful experiences. The idea of being in the Travelling Team was a big leap of faith, itself, for me. I've also learned to work in a team, most of the time a complete stranger, to understand where they excel and where their limits are and how to help them."

"I'm ready to minister to Campers this summer. It made me feel more committed. There were times when I wanted to leave but I remembered that I am doing this for the Campers so they can learn more about God, so they can follow Him."

"This past week has challenged all of us in our faith especially in some Teams being changed. This did help me understand that God does have a plan for us and that we need trust and put faith in the Lord. This also helped me understand new stuff that helped me grow spiritually (for example the devotions and the messages from the evening speakers). Although this was one of the toughest Retreat Weeks I ever had because of the new changes, it has been a wonderful experience."

"This past week I really felt God's presence. I learned how to trust Him in every circumstance, especially when things did not go as I thought they would or whenever I found myself feeling down about being a Travelling Team Member. I am ready to go out and minister to these children."

"This week was very different from past retreats for obvious reasons like the space and sleeping arrangements. It was also different in that it changed the way I viewed and loved other Team members since we were able to share family and/billet situations and were able to support and pray for each other. I've been able to see God's love through the group's support and prayers."

Travel
Travel while “on Team” is taken care of by CTM and the individual communities and dioceses in which you will be working. Travel to and from Montreal at the beginning and end of your time here is your own responsibility. You will be met at Montreal's Pierre Elliot Trudeau airport or the train or bus depot upon arrival.

Some Teams will travel to New Brunswick, Ontario, Saskatchewan, and Alberta and British Columbia while some Teams will travel around parts of Montreal and the Province of Quebec. Teams have travelled by all forms of transport, including planes (large and small!), trains, boats, cars, and long distance buses.

For those from Other Countries
Canada is 5,156.80 km (3,223 miles) wide and is divided into 10 provinces and 3 territories. If you plan to stay on for our Senior & Junior Camps and Focus Weekend you will still have almost two full weeks between activities in which to explore.
Visitors to Canada require a passport for entry. Canadian electricity is supplied at 110 volts. All Team members are required to carry an International Student Card. This card is necessary for purchasing bus, train & airline tickets at a student rate, while travelling in the U.S. & Canada.
For all of the six weeks you are on Day Camps you will live with a family, couple or individual in their house. It is expected that during that time you will attempt to become as much 'a part of the family' as you can.

Entertainment
You will spend times enjoying yourself in evenings and on Saturdays (these are your times off) with billets, travelling and local teams. It is suggested that at least half your evenings are spent with your billets, getting to know them. This may take the form of a quiet night at home or an evening out. The local helpers and Travelling Team will often do something as a group one evening, which is good for bonding the two teams together.

Finally, your Travelling Team Members, with whom you are likely to become quite close over the six weeks, will also want to do something together. You are responsible for your own financial needs, although, while on Day Camps you will not need to pay for transportation, accommodation or food.